Whenever I hear Europeans per se the Indian equivalent of western countrymen talking about the Indian middle class’ I often wonder what do they mean? What section of the Indian society are they referring to?

Are they referring to the conventional wisdom consisting of the 601 million odd consumer class, or the few 100 million people with the ability to afford their luxuries? Or the ones who earn the equivalent of US 2$ a day according to 1993’s paltry statistics?

The clamour of the economic reforms and the European statistics has been focused on these groups which seem sociological but is not entirely logical. The fact is that the rise of the new middle class in India – drives and makes things happen in an uninhibited, pragmatic and amoral fashion. They also comprise of an exploding consumer market which is best of described as a potential gold mine waiting to be tapped into.

However, what has never been completely clear is the size of India’s middle class. 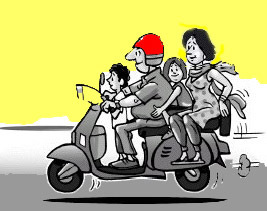 In the present times the Indian middle class is a ripe target for international brands. This is reflected from the overflowing advertisements of the international brands on Indian television(s) or glossy magazine(s). Brands ranging from Ray-ban to Armani, Nike to Bata, Hindustan Unilever to Vicco Vajradanti, Fair & Lovely to Head & Shoulders. Even the automobile companies are aiming to target the consumer laden class with their hatch-back products and sedans. This is why there is a rush for endorsing sports persons to attract youngsters, primarily the cricketers.

This makes me remember a time when Mohd. Azharuddin (former Indian cricket captain) had endorsed Nike footwear. This had sparked of an unintended controversy- that a name resembling the Prophet cannot adorn a lowly item as a footwear.

Even alcohol brands ranging from Kingfisher (*United breweries) to Tuborg have started selling their pun intended water bottles, and Bacardi the music CDs (be what you want to be), primarily because alcohol is not permitted to be aired or marketed directly to the consumer base in India. However, it is a famous fact that more bottles of Johnny Walker Black Label are sold in India than they are distilled in Scotland.

Despite the above approach towards the Indian market, the international brands have received a dismayed response. The primary reason being that the Indian middle class is not as cracked up as it seems to be from the economic point of view. Prima facie the state is indispensable to most people and is unable to provide vital requirements like- physical security, law, infrastructure and basic amenities. Although the country has grown exponentially since 1991, but the facilities still seem to lack, are unreliable or dilapidated.

Ironically, amongst the 600 million middle class consumers, barely 100 million or less are able to afford the luxuries of basic material consumption such as the shampoos by Proctor & Gamble. I agree that the said consumer base does purchase basic goods but they are cheaper than the products of the multinational companies. If you are selling tea, coffee, hair oil or fairness creams and plastic buckets, then you definitely stand a chance in India’s ever expanding consumer base. A fine example of the same would be- “the Red-Mi mobile phones, a penny-wise slippers, the flowery t-shirts, Tupperware lunch boxes (banned in the U.S.A.) and the clinically failed generic medicines”.

Why didn’t I mention sport shoes? Because majority of the people in the said class barely earn money half the price of the Nike shoes.

It’s not that Indians are not buying anything. You endorse white skinned person in an advertisement and make him speak in Hindi “sasta nahi sabse achcha” (Not just cheap but the best), the commonwealth mind-set will suddenly kick in.

Yes, I agree that from the pre-liberalisation era (pre-1991) there has been indefinite growth. Bi-cycles have become too common in Indian rural areas, whereas the houses made of mud and hatch are becoming pukka these days.

The television ownership is rising, republic is not an ideology anymore but a news channel. “Swaraj” is not an aim but a foreign minister, “Chillar” is not a penny but Miss World (with all due respect). India has an ever growing base, but what they consume and how much can they afford to pay is another matter altogether. One thing which is actually changing at a steady rate is our indifference to the global brand(s). But will it last?

The change is peculiar in nature which probably even Chinese cannot comprehend. The economic transformation of India since liberalisation is real but it will be a while until our middle class can afford an apple or an erstwhile Blackberry product altogether.

The composition and character of the new Indian middle class is indeed unique because it now has people who are typically not considered to be belonging to the middle class. Hence, middle class has become the new “status marker” or the “status quo” which the poor aspire to be in a status conscious society.

If you liked the post above, drop your comments below or contact here- Throw us a sheep! Your message(s) shall remain confidential.